An Insight from Carl Sagan

From his book Billions & Billions:


There is a well-documented worldwide correlation between poverty and high birthrates.  In little countries and big countries, capitalist countries and communist countries, Catholic countries and Moslem countries, Western countries and Eastern countries - in almost all these cases, exponential population growth slows down or stops when grinding poverty disappears.  This is called the demographic transition.  It is in the urgent long-term interest of the human species that every place on Earth achieves this demographic transition.  This is why helping other countries to become self-sufficient is not only elementary human decency, but is also in the self-interest of those richer nations able to help.  One of the central issues in the world population crisis is poverty.

The exceptions to the demographic transition are interesting.  Some nations with a high per capita income still have high birthrates.  But in them, contraceptives are sparsely available, and/or women lack any effective political power.  It is not hard to understand the connection.

At present, there are around 6 billion humans.  In 40 years, if the doubling time stays constant, there will be 12 billion; in 80 years, 24 billion; in 120 years, 48 billion. . . . But few believe the Earth can support so many people.  Because of the power of this exponential increase, dealing with global poverty now will be much cheaper and more humane, it seems, than whatever solutions will be available to us many decades hence.  Our job is to bring about a worldwide demographic transition and flatten out the exponential curve - by eliminating grinding poverty, making safe and effective birth control methods widely available, and extending real political power (executive, legislative, judicial, military, and in institutions influencing public opinion) to women.  If we fail, some other process, less under our control, will do it for us.

Perfectly logical.  If common decency is not enough to move the world to act, perhaps self interest will.  But how to achieve such a monumental task?  First, some stats:

Consider the global priorities in spending in 1998 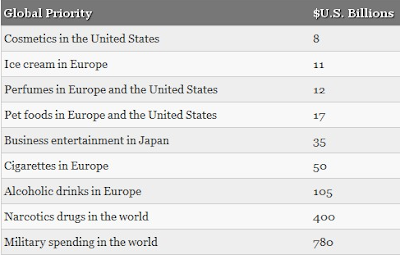 And compare that to what was estimated as additional costs to achieve universal access to basic social services in all developing countries:


Let's face the truth.  America and Western Europe created many of the problems facing the developing world.  From colonization to propping up friendly dictators, from globalization to imperialism, we have raped and pillaged much of the world.  It is time to repair the damage we have caused.
It is our moral responsibility.
Posted by Johann the Cabbie at 7:57 AM