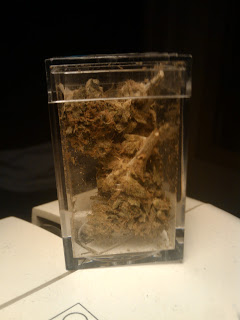 So, I took my piss test a couple weeks ago, and now I'm free to indulge without worry until next year.  I haven't smoked since maybe June, and my tolerance has left me completely.  I smoked a half a bowl the other night, and I was baked for hours.  It's also really good shit.  So, that coupled with the lack of tolerance, I was, as K puts it, on the other side of the universe.

One reason that I haven't smoked since June is that until now, I didn't have a connection, as in a source, supplier, weed guy, the man, Johnny, delivery.  I met a new Johnny in my cab the other day (not really how I met him, but good enough) and he hooked me up with a bit of bud for forty dollars.  Seems a bit steep, but as I said, it is good shit.

Connections are rather tough to find in the city.  Most are extremely cautious, and keep their circle of costumers on a tight, referral only basis.  The NYPD spends far too much of their valuable time chasing down pot offenders, so it can be tough to meet a trustworthy guy. But, I may have found one finally.  I will give him a call occasionally.

In the spirit of the season, I would like to give thanks to the men and women who risk their freedom growing and selling this (mostly) harmless plant.  This drug has never killed anyone, is about as addictive as caffeine, and is pretty damn pleasant.  Yet, in New York City, cops spend $90 million a year arresting 40,000 people for marijuana offenses.  All this despite the fact possession of up to an once was decriminalized in the 70's.  The cops here like to play a nasty trick in order to inflate their arrest numbers.  While possession has been decriminalized, possession or use in public view is still a misdemeanor.  While stopping and frisking someone (itself blatantly unconstitutional) cops will order them to empty their pockets and place everything on the hood of a squad car.  If any weed turns up, it's then considered in public view, and an arrest is made.  Rule #1, never trust a cop.

Despite our last three presidents all being former pot smokers, the feds also spend far too many precious resources chasing down pot growers.  Take the case of John Robert Boone, a 67 year old farmer who has been on the run for the last two years.  Feds recently found 2,400 plants on his Kentucky farm, and he has been on the run ever since.  This arrest, if it's ever made, would be his third federal rap, so he is facing the rest of his life behind bars.  He isn't accused of killing anyone or being violent, yet he still faces the loss of his freedom for providing the toking public with a flower that one third of Americans have tried. Being in the weed business all of his life, he has become something of a legend.  As of this writing, his Facebook fan page has 2,211 fans, and local Kentuckians can be seen sporting "Run, Johnny, Run!" T-shirts.  Some of his tactics to avoid getting busted has added to his fame.


Boone's 1980 wanton endangerment charge was anything but a run-of-the-mill felony, and the details of the arrest are the stuff of lore.

Deputy Habib says Boone caught wind that the cops were planning to raid his substantial marijuana crop, so he and two friends climbed into a black pickup truck and drove wildly through the small town until they arrived at the police station.

After driving up on the sidewalk and nearly clipping a police officer, the bandits, as they were often referred to as, led the local cops on a wild chase through town until they ultimately lost the tail.

But the bandits weren't done yet.

According to Deputy Habib, the bandits then drove around until they found an off-duty state trooper's home, and they proceeded to ram into the trooper's cruiser.

The trooper called in all the Kentucky State Police units he could muster, and Boone's group led them on yet another wild chase through Lebanon.

Eventually, Boone and his crew were arrested, but they had accomplished their mission -- while the cops were busy chasing after him, Deputy Habib says Boone had his cronies, all members of the notorious Cornbread Mafia, move his cache of marijuana out of the farm before the lawmen could get their hands on it.

The charges against Lebanon's bandits were ultimately dropped, however, because the pickup truck alleged to be involved in the joyride had never been recovered.

So, as I kick back and light my bowl, I've got only one thing to say: