Well, some of them do anyways. From AnonNews:

TO THE CONGREGANTS OF WESTBORO BAPTIST CHURCH:

We, the collective super-consciousness known as ANONYMOUS - the Voice of Free Speech & the Advocate of the People - have long heard you issue your venomous statements of hatred, and we have witnessed your flagrant and absurd displays of inimitable bigotry and intolerant fanaticism. We have always regarded you and your ilk as an assembly of graceless sociopaths and maniacal chauvinists & religious zealots, however benign, who act out for the sake of attention & in the name of religion.
Being such aggressive proponents for the Freedom of Speech & Freedom of Information as we are, we have hitherto allowed you to continue preaching your benighted gospel of hatred and your theatrical exhibitions of, not only your fascist views, but your utter lack of Christ-like attributes. You have condemned the men and women who serve, fight, and perish in the armed forces of your nation; you have prayed for and celebrated the deaths of young children, who are without fault; you have stood outside the United States National Holocaust Museum, condemning the men, women, and children who, despite their innocence, were annihilated by a tyrannical embodiment of fascism and unsubstantiated repugnance. Rather than allowing the deceased some degree of peace and respect, you instead choose to torment, harass, and assault those who grieve.
Your demonstrations and your unrelenting cascade of disparaging slurs, unfounded judgments, and prejudicial innuendos, which apparently apply to every individual numbered amongst the race of Man - except for yourselves - has frequently crossed the line which separates Freedom of Speech from deliberately utilizing the same tactics and methods of intimidation and mental & emotional abuse that have been previously exploited and employed by tyrants and dictators, fascists and terrorist organizations throughout history.

ANONYMOUS cannot abide this behavior any longer. The time for us to be idle spectators in your inhumane treatment of fellow Man has reached its apex, and we shall now be moved to action. Thus, we give you a warning: Cease & desist your protest campaign in the year 2011, return to your homes in Kansas, & close your public Web sites.
Should you ignore this warning, you will meet with the vicious retaliatory arm of ANONYMOUS: We will target your public Websites, and the propaganda & detestable doctrine that you promote will be eradicated; the damage incurred will be irreversible, and neither your institution nor your congregation will ever be able to fully recover. It is in your best interest to comply now, while the option to do so is still being offered, because we will not relent until you cease the conduction & promotion of all your bigoted operations & doctrines.

The warning has been given. What happens from here shall be determined by you.

This is the same group that attacked PayPal and MasterCard after those companies stopped processing donations for WikiLeaks. They have also been going after Scientology for years. They are a strong supporter of free speech, as am I. On first reading this, I was surprised that they would attack a hate group that is practicing their free speech rights. On reading the comments to the letter, I found that there is considerable disagreement among Anonymous whether this would be a justifiable attack.

But, I hope they go for it. If nothing else because of the lulz. If they can take down PayPal for hours, imagine what they can do to a small group like WBC. And, if anybody deserves harassment, it's Fred Phelps and his gang of hate mongers.

Go for it, Anonymous. 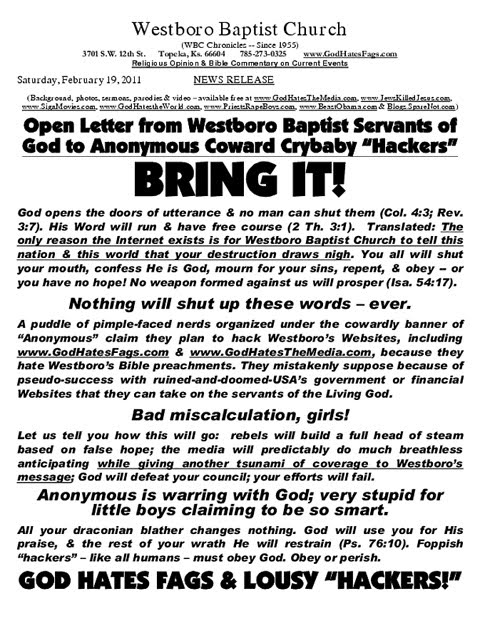 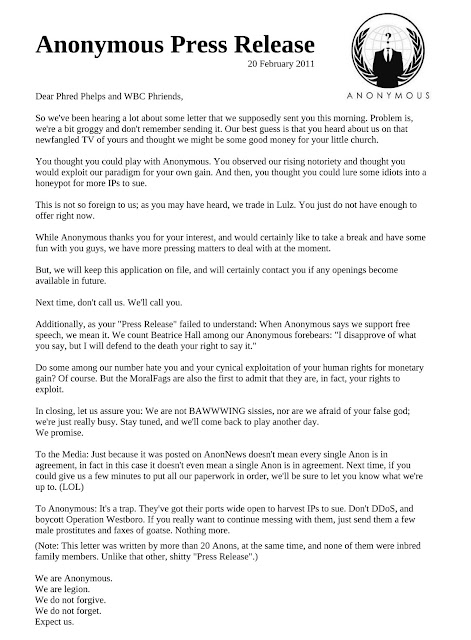 I must confess to being somewhat disappointed. I was getting the popcorn ready in anticipation of a delightful battle. Bummer.

via Joe.My.God. and Atheist Experience
Posted by Johann the Cabbie at 5:46 PM