I was running low on cigarettes, and I decided to switch to roll-your-own in order to save money. I spotted a tobacco and shop and wandered in. The old man behind the counter spoke broken English, but far better than my seven words of Italian. He knew enough to get me what I want and to tell me how much. €5.20. Not bad seeing that I roll them thin and can get at least fifty smokes from the pouch.

Leaving, I saw a shelf full of small bottles of grappa and sambuca. Not airplane size, but slightly larger at 5cl, whatever that is. I was tempted, but not enough to spend €5, so I kept walking.

Not long afterwards, looking for lunch, David called and informed me that our grand tour is coming to end. I've been expecting as much; David doesn't seem to like traveling by train from city to city, hotel to hotel. He likes cruise ships, and he's looking for one that will take him back west. Me, I like trains.

When David originally proposed this trip, he promised to fly me back to Bellingham at it's conclusion, and I've asked for the cash instead. I've decided to head to Amsterdam, a city that I've wanted to live in for years. I figure that I'm almost there, I might as well go. I have no job, wife, or kids expecting me back, so I'm relatively free. After ten years driving cab, I'm ready to put that freedom to good use. Also, I want to give socialism a try. Maybe I'll even get health care.

So, we met at the train station, and he got me a ticket and some cash. I leave Sunday morning. The trip is nearly twenty-three hours with a four hour layover in Munich. I wonder if I'll still like trains afterwards.

We parted for the afternoon; him to research cruise ships, me to climb the dome. A Facebook friend clued me into the Doumo di Firenze, a big assed dome on a cathedral that tourists can climb up for free and get a spectacular view of the city. I found it and waited in a long line, respectfully removed my hat and went inside. It was a church, and a big one, but most of my readers know my opinion of churches, so I won't rant. I looked in vain for the line to the dome and finally got around to asking a security guard. He pointed across the way and said, "At that door, outside." I had gotten into the wrong line, and to see a church! Dammit.

I went outside and found another, not quite as long, and the correct line. I waited, and eventually got to the front and discovered that things have changed since my Facebook friend climbed the dome. Instead of free, it's now €8. I considered for a bit and decided that €8 could be better spent on a panini and a 5cl bottle of grappa. What money I have must be spent carefully and wisely until I get a job and an apartment.

I wandered the streets, found a panini (prosciutto and mozzarella, €2.50, I saved!), and set out for the tobacco shop. When he saw me, the old man said, "So soon? You smoke fast. Go slow. Live old, like me."

I told him I wanted to try grappa and he got me a bottle. I asked if I should mix it with water or Coke, and he said, "No! Drink like man!" and pantomimed drinking from the bottle. I did. It was nasty. I should have gotten the sambuca.

And, I finally got around to googling something. A 5cl bottle is an airplane size bottle. Just a different shape that looks a little bigger. I think I overpaid, but no harm. I'm in Italy. How could I not try grappa? 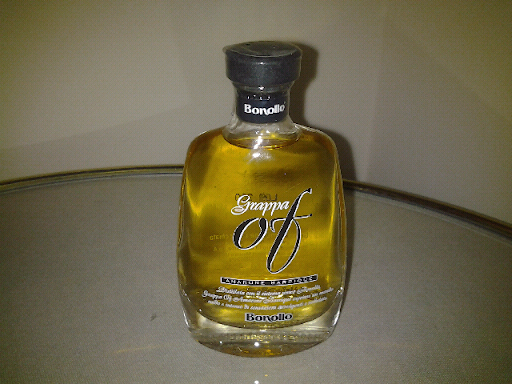 Posted by Johann the Cabbie at 4:35 PM