I move to a new town and visit Sicily.

The character of any town is determined by the nature of its citizens. Sunday we docked at unpronounceable port near Rome and ended the first leg of the cruise. About 2500 people got off and about 2600 new cruisers boarded. And, we were off on the second leg of or back-to-back cruise. With the change of so many people, I feel like I'm living in a different town. I've left the retirement community, and I've joined a much  younger, more diverse, and hipper village. But not that hip, this is a cruise.

And so much more European. The last cruise was 5/6th American, and this one is only 1/3. I've learned a few things about Europeans the last few days, all stereotypes and generalizations of course. I'm not one of those liberals who thinks all stereotyping is wrong. It's how one uses stereotypes that can be problematic.

1) Europeans are incredibly disrespectful while attending theater. They talk, laugh, joke, and act as if they are in a bar, with no common courtesy for the performers or fellow attendees. I have decided that unless a show looks really damn interesting, I won't bother to see theater while in Europe. Good thing that I don't really like theater much anymore.

2) Europeans take the stairs. An American will take an elevator up only one floor, and often down only one. Even healthy Americans. Even healthy Americans who are going up one flight to go to the gym. Europeans will take the stairs even when they are going down five flights or up two or three. Today I followed an elderly woman up two flights, even though it was a bit of a struggle for her. I've long been more  inclined to take the stairs, unless I was going up a number of flights, or with people. Or drunk. I do so for speed, exercise, and common courtesy. I get annoyed when I'm going up several flights on an elevator, and some lazy, fat-assed fuck slows my day by getting on and getting off after only one flight. Especially when this happens ten times on an eight flight trip. I'm aware that some people may have an unapparent disability, but most are just lazy.

3) Europeans smoke a lot. On the first leg, the smoking corner on the pool deck would have only a few puffers at a time, but now it is always crowded. Often I can hardly find a seat. I find that despite the crowd, I am spending quite a bit of time puffing away in that corner of the pool deck. I suspect it has something to do with all of the European ladies in bikinis. In an effort to keep from chain smoking, I'm looking for other reasons to lurk in my favorite smoking corner, such as writing this post.

My free drinks are gone. For this leg of the cruise, we had to get new cards. No one made a mistake this time, so I lose all of the perks that the rich people get. Oh well, it was fun while it lasted.

I think I could have gotten laid Sunday night. I was at the disco, sitting at the bar, drinking water when a lady in her mid fifties sat next to me. She complained of the insanity on the dance floor and asked if I could provide some sanity. I asked the nature of the insanity, wondering where this could lead. She was tall and thin with short red hair, and obviously on the prowl. She responded that two black, homosexual men were grinding against each other on the dance floor. "I don't care what they do in private, but I don't want to see it."

I lost interest. I can happily have casual sex, but not with a homophobe. Unlike some, I have to actually like those I bed. I suppose I should have called her out on her bigotry immediately, but I was shocked silent by it, and I'm not very good at confrontation in person (unlike my confrontational nature on these here digital pages). In hindsight, I wish that I had simply told her that I was gay. 20/20.

David said that I should have fucked her anyways, and afterward told her that the experience turned me off women and that I think I'm gay now. "That woulda learned her."

I saw her the next night with a young Italian guy. She seemed pleased with her catch.

I'm meeting folks from all over at the smoking spot. Germans, Norwegians, Croats. Last night a forty something Japanese couple walked by and the lady approached me.

Her: Sorry, can I cigarette?
Me: Hai, dozo.
Her: Ah, arligatou gozaimasu.
Me: Dou itashimashite.
Her: (something well beyond my comprehension)
Me: Sumimasen. Ich spreche nur ein bishen Deutsche.

I was just talking to the German fellow a few minutes earlier. I confuse languages at times. In France last week, at a restaurant, I kept saying hai instead of oui. The waiter started calling me Japanman.

We went to Massina, Sicily the other day. I had the best pizza of my life. With half a million Sicilians living in New York, I wonder why I haven't had pizza like that before.

Massina seems to be a poor town. There seems to be very little traffic enforcement. Litter is everywhere. The sidewalks are crumbling. And you can't find an English newspaper anywhere.

We came across a guy smoking a joint at some scenic spot. I wanted to ask for a hit, but I don't know the language or customs. I did say ciao, and he greeted me back, but didn't offer the joint. I need to learn to get over my shyness.

The view was amazing. Too bad I'm so technologically impaired that I can't share it. But, here's a view from the boat that morning. Assuming it goes through. As a former cab driver, I'm impressed that the captain was able to find a parking spot right in the middle of downtown. The church in the background was where I stumbled across the pothead. 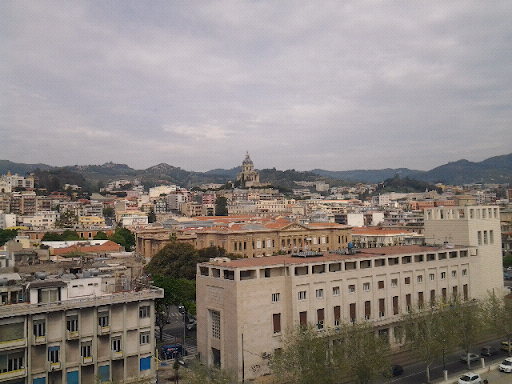 Posted by Johann the Cabbie at 5:31 AM