On Sunday, David and I finally disembarked from the damn boat. Cruising isn't for me. The idea of getting to port, wandering around for a few hours, and them taking off for another port doesn't work. I like visiting each city for at least a few days, so I can get a good feel for it. Also, the cruising model gives no chance to experience a city's nightlife. I like nightlife.

We disembarked in a little port town by the name of Ciavatcchia, which I can neither spell or pronounce. Civetchia's primary industry is its port, being the second busiest cruise ship destination in Europe after Barcelona. They call themselves the Heart of Rome. I don't know how the Romans feel about that. They aren't part of Rome. It's like Newark calling itself the Heart of New York. Sounds silly to me.

David found a little hotel in Ciavtecchia. It's a bit cheaper than the hotels in Rome (but not cheaper than the hostels), and it's only about an hour from Roma Termini by train, which is only €9 round trip. They claim their building is an "ancient 19th century palace," which cracks me up. Imagine something not even 200 years old being called ancient. But, this is Civitivechia, not Rome. A building doesn't have to be very old to be considered ancient in the Heart of Rome. They don't have free wifi, but do have a truly kick-ass continental breakfast. I tried four different types of coffee.

Wandering about Civtiviechia, looking for our ancient palace of a hotel, we met Angela from Boston who worked on another cruise ship. She was off to Rome to check out the Colosseum. David asked if she wanted company, so we tagged along.

Angela's main goal was to see the Colosseum, and to get back to her boat. She had a deadline of 6:00 PM, but she wanted a large cushion because even a minute of tardiness meant dismissal. Those cruise companies are strict.

So, we grabbed lunch at a happy little café and wandered off towards the Colosseum. There we were accosted by people looking to organize group tours for the cost of the €12 entry fee plus another €15. They claimed we could then skip the line, which was the main selling point for David. He doesn't like lines. We signed on.

Our tour guide was a woman with a quiet voice and a strong accent. She used an amplifier, but with static and accent, a could hardly hear her. The tour sucked. We saw a wee bit of the place and heard mostly static. The most interesting thing I learned was that the Colosseum is a brick structure. I have always thought it was marble. I thought the Romans built everything out of marble. Also, I discovered that the design of stadiums has been little changed over the years. The method of getting people in, to their seats, and back out is pretty much the same today as it was 2000 years ago.

Our ticket (actually a little yellow sticker that didn't look particularly official) also entitled us to a tour of Palatine Hill. After a quick consultation and a bit of math, Angela decided she had time to see that also, so off we went. We got a new tour guide, a Canadian by the name of Stan. He had a loud voice, and knew how to project it, so he didn't need a staticy amplifier. He was a damn good tour guide.

He brought us to the top of the hill which was covered with crumbling and crumbled brick walls and partial structures. Stan filled us in on the whole lack of marble issue. The Romans built brick structures and covered them with marble tile. They did not build with solid marble block. Perhaps if they did, more of their crap would have lasted the centuries. The marble is all mostly gone now because the Vatican stole it all, though they prefer to call it "recycled." I want surprised in the least to learn this tidbit.

After the tour, Angela was in a rush to get back to her boat, so we had a mad dash to the station. The subway cars are heavily graffitied, like New York's in the seventies. They also do not announce the next stop, so one best know where one is going.

Once at Roma Termini, we accidentally got on a first class car, but as the conductor never checked tickets, we didn't complain.

The next day, David and I wandered about for awhile and then went in search for the coolest bit of ancient architecture in all of Rome, perhaps in the world. A bridge called Ponte Fabrico, built in 62 BCE by some dude named Fabricus. I wonder if he gave us the word fabricate. The bridge has been renovated a few times, but it is still mostly the same bridge Fabricus built. We walked across it, and I doubt I'll ever walk across one older. Think about it; it was built about a hundred years before the myth of Jesus was created. I was awed.

The  smaller arch in the center is to allow water to pass during floods, so to lessen the pressure on the span. 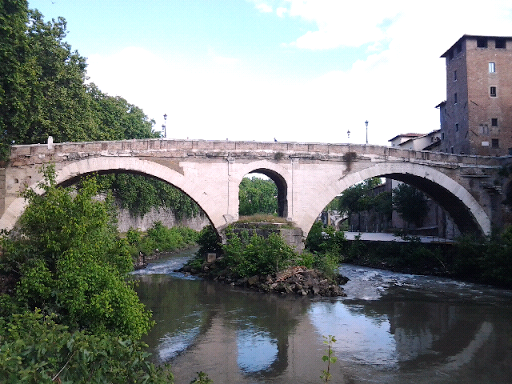 Posted by Johann the Cabbie at 3:23 PM