Now I know why. The Dutch are not known for their cuisine. I once ordered a cheeseburger in a little kitchenette and saw the cook take a frozen patty from the freezer and drop it in the deep fryer. I tried a croquette in a café and it was a deep fried stick filled with some kind of meatish paste. The only decent food I've eaten in Holland came from either an ethnic place or Burger King.

When I landed my WWOOFing position with an organic farmer, I envision thick slabs of ham, juicy steak, lots of potatoes, and fresh veggies. I imagined food like a farmer eats, and a lot of it.

It should be understandable that I think that farmers eat good, hearty meals. That's the stereotype. But, sadly, stereotypes are only generalizations. Not every member of a group shares the group's stereotypes. Not all Germans are meticulous. Not all Asians are studious. Not all Irish are drunk.

And not all farmers eat good, hearty meals.

My deal at this farm is simple. I work thirty hours a week in exchange for room and board. My room is an old camper parked behind a storage shed. Board is bread with cheese and peanut butter for breakfast and lunch. Sometimes I get fruit, either apples or bananas. Lunch is the same. Sometimes there's meat. Processed meat. Dinner is usually rice, boiled to mush, vegetables of some sort, boiled to mush, and some kind of meat. Processed meat. Usually a sausage thingy, either link or patty, always small. Mondays we have smoked mackerel that is mushed into a baseball sized lump. Saturdays are the best. A big piece of deep fried fish bought early in the day and warmed up in a frying pan. On rare occasions, we get potatoes boiled to mush instead of rice boiled to a mush. Boiled to a mush potatoes with plenty of salt and butter are delicious. At least compared to rice boiled to mush.

Only once have I been served a piece of meat that was the actual unprocessed flesh of an actual animal. Just last week, we had chicken breast. Boiled, not to mush, but still way overcooked. It was fucking delicious. Give me an overcooked chicken breast and boiled to mush potatoes everyday, and I can be a happy man.

A week or so ago, the farmer's son was discussing his disappointment in a ham he had bought (and eaten elsewhere), and his discovery that it was only 80% ham. The rest was water. He expressed the opinion that if one buys meat, they should receive meat, and nothing else. Except hamburgers, "because they're hamburgers." I thought of the cheeseburger I once attempted and told him that in America, the definition of a hamburger is 100% beef. He was skeptical.

Yesterday, we were served a small round patty…something. The farmer's son informed me that it was a hamburger and asked if it would be called a hamburger in America. I said that hamburgers are always 100% beef. Anything else isn't a hamburger. The farmer asked what we would call this…something that we were eating. I paused, wondering if an honest answer might offend, then decided fuck it. I said, "Mystery meat." The farmer laughed and said that that is a good name.

A while back I found a package of cookies in the grocery store called American Style Brownie Cookies. I've never heard of a brownie cookie before, despite being from America, but I thought I'd give them a try, for they were half off. They were cookies in the shape of brownies. They tasted just like Chips Ahoy. Absolutely fucking delicious.

In related news, I've finally lost that twenty pounds or so that I've been trying to get rid of. 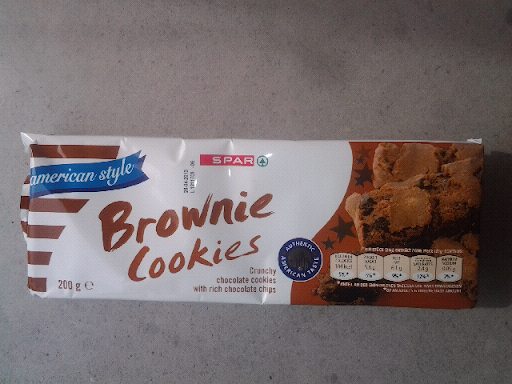 Posted by Johann the Cabbie at 6:32 AM No comments: